I have seen this mentioned a couple of times recently but can’t find the threads any more to add any info to but my bank tagging rules for EE fail no matter what I put in the text box. It finds the transactions in the rule edit screen (4 matching transactions found)* but doesn’t carry out the rule when the transactions are imported from the feed.

* although it shows 5 matching in the rule overview list. Just checked a couple of others and some show 1 more or 1 less randomly, seems there is another issue here too.

The actual transactions themselves, do they consist of anything other than “EE”, or is that it?

And the rule you’ve set up, I’m assuming it’s a “starts with” and “EE” as the criteria?

The transactions on the feed used to come in from Starling as just EE so it was difficult/impossible to tag them as I think the rule needed to be >3 characters?

That changed a bit back and now the transaction reference is EE Q12345678 so that is the full match text I am using, and obviously matches with both ‘contains’ and ‘starts with’.

I’m wondering if this is an issue with editing a rule? Just noticed that another rule that wasn’t working worked perfectly when deleted and entered again rather than being edited. I think this has actually happened to several rules over the last few months as I changed from Barclays to Starling and some rules needed different match criteria due to changed descriptions. So could also be down to a new bank account/feed being added later?

Also noticed that there is a minor issue with highlighting of text in the action list (would expect Money Out to be red). 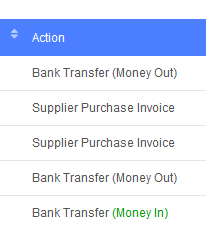 Apologies - I thought I replied to this yesterday. “EE” in itself shouldn’t be possible. There is a minimum length of 4 characters to match it, otherwise, it’s a bit too broad to match.

Thanks for the screenshot - will take a look at this with our development team.

“EE” in itself shouldn’t be possible. There is a minimum length of 4 characters to match it, otherwise, it’s a bit too broad to match.

Yeah I eventually gathered that by trial and error but then EE/Starling started sending the full account number with the transaction so the problem sorted itself from that perspective, but still didn’t work from the QF end.

Have you been able to look into this any further? Had this months payment come through on the feed but no tagging took place.

Let me send you a private message so we can take a look for you.