May just be me though!

Can you confirm that Stripe actually collected £37.20? Is your Stripe setup configured to add on surcharges, just wondering if QF and Stripe both added a charge on?

I weren’t aware (and can’t find) an option for Stripe to add a charge on. 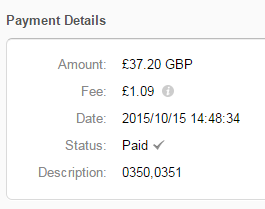 I’ve escalated so we’ll take a look and report back.

OK we identified a specific issue with Stripe and percentage based card charges. What happened here is the 1.5% was getting rounded to 2%. It was treating the percentage as an integer rather than a decimal, it most likely stemmed from our C# migration. However we do have that fully patched now. Apologies for the confusion.