Country getting added to the address when new client is created

So I said earlier in the week that I couldn’t hide the UK on invoices, then thought it was human error, but have since realised that on invoice customisation the hide country is correct but it’s still showing on my invoices… Whilst it’s not biggy it just looks wrong on the invoice! HELP?

The hide country option will not retrospectively update invoices before the option was selected. It’s effective only for new invoices where the client and sender country are the same.

You can always go in and modify that invoice to remove the country.

Hi @Glenn Its not hiding it on new invoices? They are still appearing with ‘United Kingdom’ on them?

Looking at account ***5554, if I create a new invoice for your test client, the country is not showing. The last invoice I see on this account was raised in February.

Hi @GlennQF that’s not the correct account. Will PM you.

Thanks, I had a look at the other account and attempted to raise an invoice. I can’t see the country name in the address for any new invoices raised, this is the test client on the account. 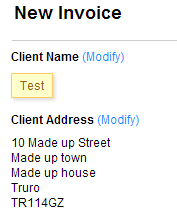 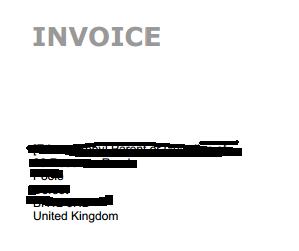 How did you create that invoice? When I go into the general invoice creation form and use that exact client no ‘United Kingdom’ appears?

Did you create this some place else?

Also just as a quick fix, with any invoices like this you can go to modify it and click the Modify link next to the address then manually remove the ‘United Kingdom’. 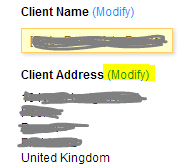 I think I probably did it the same way or sales tab, create invoice.

On the screen it appears without UK but when I ‘print’ it, the UK is added again!

OK so I discovered that the invoice was created as a copy from another invoice. Because that original invoice had United Kingdom in the address this was transferred to the new invoice.

@Glenn take a look at invoice 10055 that I just created… Click print… UK is there! I’ve just screen printed it on my phone- will DM as it’s my home address.

It may be something to do with the fact that you’re using an iPhone…Although I’m not sure how that would cause a difference in behaviour? I am using Chrome and I just can’t replicate what you’re seeing. Unfortunately I don’t have an iPhone to hand right now to test this theory with but I will refer this to a developer next week to take a closer look.

Hi Glenn
I was using chrome last night when I was doing all of the last lot which have UK on too!

I need to do a whole load more today so I’ll see what happens! And update this later.

It’s no biggy I appreciate but just doesn’t look right to customers.

I’ve now checked the server logs to see exactly what you’re doing and I’ve finally figured this one out!

When you’re creating an invoice you’re clicking on the popup to create a new client, when I was testing I was searching for and adding an existing client record (which works fine). I can see that whenever a brand new client is added, the country is getting appended to the address. This shouldn’t be happening and this scenario is not being handled properly.

I have switched this thread to a bug now and renamed it. It should be very trivial to fix this but we will get it working right.

Thank you for your patience, sorry it took a while to get there

Haha! Well investigated! Nice one @Glenn thanks for your help :-))

No problem, I’ve actually managed to fix that as it turned out to be a very small change. Let me know if you come across any further issues here. Have a nice weekend!