Credit note without entry on bank?

I would be grateful if you could advise on how to create a Credit without it creating an entry on the bank account.
The issue i have is that within my sales I have 2 Credits. When i enter these they create a transaction on the Bank Statement which does not exist. The reason for this being that the client made a payment for several invoices and the credit at the same time. In trying to enter these it has now created CN00001 and 2 and 3. I would like to clear these off and if possible enter the transaction as it occured.

Also could you advise how I can rectify the following. When tagging bank transactions I have attempted to tag the Cash Machine Transactions to my Directors Loan Account. Unfortunately it only seemed to allow the default DLA to be selected. Is it possible to allocate to a specific DLA or do I need to allocate to the original DLA and then do a transfer to my own.

When you credit note an existing paid invoice on QuickFile, at the point of saving this you will have the option to hold funds on account (i.e. for use against future invoices). 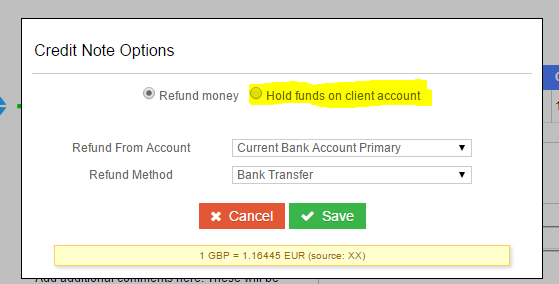 Unfortunately it only seemed to allow the default DLA to be selected. Is it possible to allocate to a specific DLA or do I need to allocate to the original DLA and then do a transfer to my own.

It should show any accounts denominated in the same currency. I didn’t see any entries on your petty cash.

Glenn
The funds were never paid. The credit was raised at the same time that a batch of invoices were issued and as such the sum that was received was correct. I see that the method you have shown would describe a position where a client paid and in paying they actually paid more. What I need to do is raise a credit that when viewed along with the other issues that were raised would equal the value of the payment that was received.

I untagged the amounts in question from the DLA. I did’nt enter it as petty cash. In effect what I was showing was a debit from the Business account for the ATM Transactions and them being credited to the DLA. The intent was to show the DLA account paying certain items from cash that I basically had in my pocket. The balance then remaining in the DLA and would show as an amount that I had taken.

What I need to do is raise a credit that when viewed along with the other issues that were raised would equal the value of the payment that was received.

You can alternatively raise a credit note on that invoice left over with the partial balance to reduce the balance to zero but it’s easier just to modify the invoice.

Regarding the second point, I’m not clear on what the issue is there? If the amount is on the DLA just tag it as a transfer to the petty cash account. If you need to use a different DLA account add the transaction first to that DLA and transfer from there instead.

It would appear as though it is more relative to provide refunds as opposed to a credit. I appreciate that your suggestion is very practical but it leaves the issue where the information I would have on my system would differ from the actual tax point documents that had been submitted to my client. Not a massive issue I know.
Is this an adjustment that yourselves would consider for future reference. Ideally allowing the option to either apply the credit to the bank account or simply the sales ledger which would then be reflected in the bank recon at a later date when invoices were tagged against the bank deposit

If you want to reduce the outstanding balance owed for that client you would locate an invoice with a balance and apply a credit note from there: 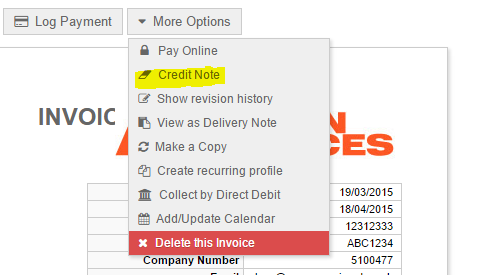 You can also credit note paid invoices and rather than refund to the bank, hold on account for use against future invoices.

Once again many thanks. By raising the credit note against the invoice it has sorted the issue. Usually the systems I have used require you to raise the credit at account level.

I would appreciate your assistance or direction in respect of adapting the invoice formats to an excel format I currently have and would like to maintain in QuickFile. As you mentioned I have made several attempts to web designers to request an indication as to if they could assist. In addition I have also contacted a gentleman who advertises a custom set of invoices on the Internet for free agent . Non of these attempts have yet been fruitful as the free agent gentleman could only develop them if they worked in the same format as free agent.
Could you please suggest someone or would it be possible to ask your own developer to give me an indication on cost after which I could simply ask them to complete the task. Any possible rate increase I am sure would be offset be the time that would be saved as they probably are more conversant with the coding of the QuickFile system