I’ve started using Quickfile and I’ve tried to search for an answer but there doesn’t seem to be a definitive answer.

When I run my balance sheet it keeps saying there is £308.56 in the Creditors Control Account.

I can’t understand it as everything else appears correct.I just can’t seem to find which transactions are unreconciled as the bank statement when reconciled is stating that everything is fine.

That’s as of 05/04/2014, it just means that on that date you had £308.56 in unpaid supplier invoices. If you go to the historical invoice report and key in the same date, you will see how that figure is made up. 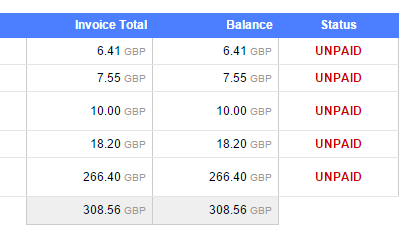 Thank you Glenn. I’ve got that in front of me now however why are they appearing as unpaid when they were paid in full apart from one? I’m sure I’m missing something simple here?

They were probably paid after the 5th April 2014.

This is just a snap shot of your account as of that date.

Thanks Parker. I’ve managed to find on one of them the wrong payment date was added. I’ve tried to correct it but I am only able to delete payment and not delete and then input a correct date as it was locked.

Any suggestions as to how I can correct these dates as this may have happened with the other transactions as well?

It’s probably been locked due to the accounting period being locked.

Many thanks Parker, cleared that now.

Think I’ve been doing accounts too long this week, couldn’t see the wood for the trees. It’s always our own accounts that seem complicated!

Except I have now gained 45p in my retained profit nominal code. Hmm ho hum another conundrum! Fun and games.

45p is a not a material amount so I won’t spend too long trying to square that off. That said I don’t see any balance at all on the nominal Retained Profit & Undistributed Reserves (3101).

45p is the net of all your sales and purchases for that accounting year, I.e. the bottom line of your P&L, when you run the year-end it creates a journal and moves the balance on the P&L over to the balance sheet 3101 as retained profits.