I used the DropBox integration for the first time today. The upload seemed to complete successfully, in as much as there are now 193 receipts in the hub to tag, however, the names have been changed on some of them and I am not able to view any of the receipts in order to tag them!

What am I doing wrong? They are PDFs and I believe them to be of reasonable size…

Providing the files are under the limit, which I believe is 10MB (will confirm shortly), and a recognised file type, there shouldn’t be any issues with importing them from a file perspective.

By default, we import the files with the same file name where possible, but some may be changed to avoid conflict, for example.

When you say you’re not able to view them, do you mean that you can’t click into them, or that a preview isn’t showing?

I uploaded the receipt files in 1 tranche via DropBox earlier this afternoon. Though they were listed in the receipt hub as untagged, all the filenames had been changed and when you clicked on each of the items to go through the tagging process, you cannot see the receipt in the window.

I deleted the files from the receipt hub, thinking that it may be related to the naming convention, as my PA had used full stops rather than underscores in the names. I have manualled amended all the names to my normal convention and re-uploaded them again via DropBox, but I still have the same issue.

You can see here that I have clicked an item to tag it. The filename has changed - it did say Screen Repair_9Mar16, and still displays as that in the DropBox imported file, plus the image is not showing at all in the display window, so I cannot go through the remainder of the process.

I have also noticed that I am not able to view previously uploaded and tagged receipts. It would appear that there is an issue with the amazon servers as they are shown as waiting: 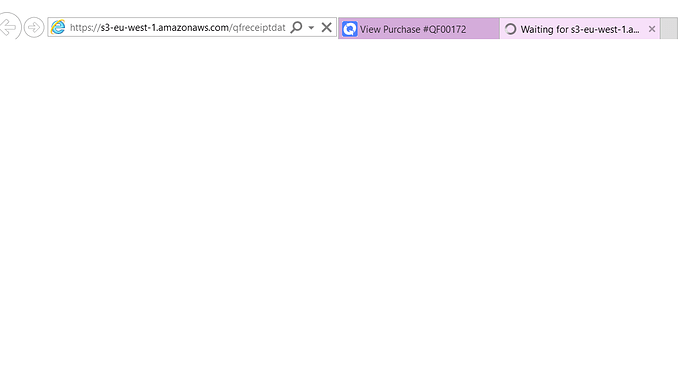 when you clicked on each of the items to go through the tagging process, you cannot see the receipt in the window.

This would be down to your own browser as this would load the file. It may be worth checking your settings to see how it handles these files. Although generally, I would recommend using Google Chrome or Mozilla FireFox.

You can see here that I have clicked an item to tag it. The filename has changed - it did say Screen Repair_9Mar16

Just to confirm, this is Screen Repair_9Mar16 (with the space)?

I have also noticed that I am not able to view previously uploaded and tagged receipts.

I’ll refer this to a developer to see if they can shed some light on this, and will come back to you in the morning.

Yes, the file name you suggested is correct. Google Chrome seems to fix the display issues

@msumner - I’ve looked into this further for you this morning, and will address your points below: