why does my nominal ledger have zero values, even if the item line has been moved to another nominal code 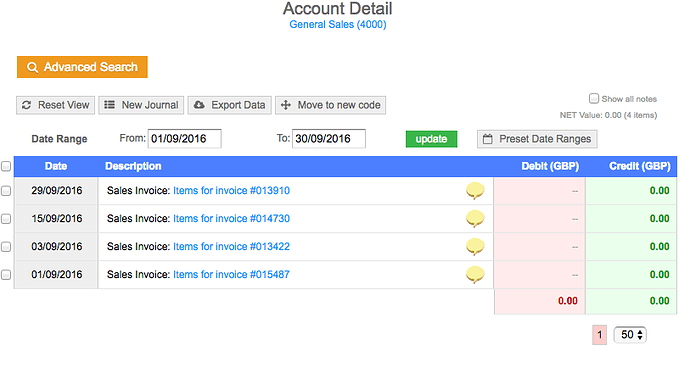 I had a problem with this too! For me, it was something to do with the fact that the invoices had comment lines. They are considered ‘transactions’ in the ledgers despite the fact that they are not actually transacting anything.

Something which should be addressed. It could make the difference between a medium and large business, impacting on the requirement to pay the subscription fee.

To give you a bit of background, when you convert a line in your invoice to a comment line, it’s still actually recorded as an invoice line with zero value.

As it’s still an invoice line, it needs a nominal code attached to it, which by default is 4000 General Sales, therefore creating a ledger entry.

However, this has been referred this to our development team for review. While I can’t guarantee anything will change or any timescales, it will certainly be looked at. If this does change, we’ll certainly let you know.

I hope this helps.

Does this mean that if you converted the comment back to a normal line, changed its nominal code to match the other lines, then changed it back to a comment, it would be subsumed into the existing nominal entry for the invoice rather than creating another?

Because the comment lines have no value, they’re automatically saved to 4000. If the rest of the invoice is using this nominal, then this would have no effect, because as you rightfully say, it would would be included with the other invoices lines.

I understand now, so if i paste the comments in the actual transaction line instead, I will not have this problem.
Is this right?

That would be correct, yes. As that line would only create one entry.

If you have at least 1 other line in the invoice using 4000 however, it won’t create another entry as all lines are recorded as one per nominal when the invoice is saved. For example, if you had:

This would generate 2 nominal entries for the invoice contents, like so:

Plus any VAT and balancing entries where applicable (payment, creditors account etc.)

Just a quick update here, we have now changed the behaviour of the system to no longer log zero value ledger entries. When comment lines were introduced it inherited this behaviour, however it wasn’t really intended.

If anyone would like us to clear any zero value entries, please PM myself of @QFMathew with your QF account number and we’ll get that arranged for you.