Glenn I know we spoke about this on a previous support task and you mentioned that the system will not import invoices with the same name.

This causes us a very tedious problem of changing the invoice names as our scanning software (and other sources of import) name each file scan 1, scan 2 etc. This means every time we do a batch of 20 to 50 invoices we then have to go and change the names of all the invoices which is very tedious.

Could an option be added to ‘import duplicate named invoices’ or something like that, so that for companies like ourselves we can turn this on and it will import everything. We check for duplicates other ways and don’t want/need the system disregarding invoices for us.

As long as you tag the first batch, even if you then upload a second batch with the same file naming convention it will still import. When you tag receipts they get relocated to a new folder, it’s not possible to have multiple files with the same name in the same folder, this is true for any sort of file system.

The only way to resolve this would be to modify the file name on upload if it clashes, but this is not a good solution and will result in people uploading duplicates.

I think the best thing would be to ask you’re scanning company to use unique file names or only upload batch 2 when you’ve imported batch 1.

Ok thanks for the clarification Glenn, I guess just tagging up what’s imported already first. I just checked the receipt hub and my dropbox folder to see if that was all that was stopping them and if you look at the images below you’ll see that lots of the invoices aren’t being prevented due to duplicate names though: 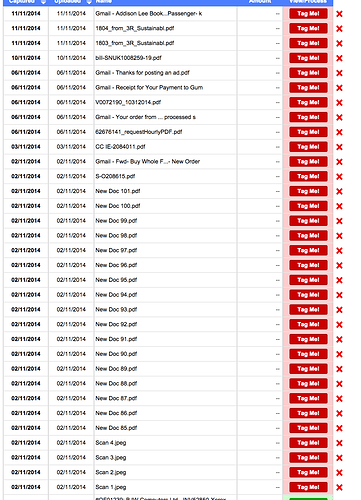 Here’s the other image, it would only let me attach 1. 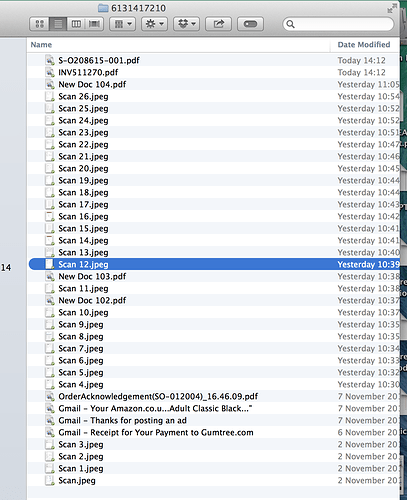 Yeh I see cases where there are files in Dropbox that aren’t in the Receipt Hub (scan 12.jpeg for example).

It may be that you need to trigger QF to look again. Your account will get polled if something changes in your Dropbox account (Dropbox fire a notification to us when something changes), so try renaming a file or adding something new, this should trigger the system to come and poll your account again. After that they should start appearing in 2-3 mins.

If not let me know and I’ll ask my colleague to take a closer look.

Glenn I’ve changed 2 filenames and left it for several hours and the files still aren’t clearing. Please could you get one of your team to look into it as you said.

Sure, I’ve passed this on to an engineer. Will report back when I know more.

OK we did discover a problem!

The system was looping through your files and hitting an exception on the following file possibly due to some character encoding issue.

We’ve updated the code to skip over any such problems so it will continue to upload the remaining items. I think if you rename that problematic file it should be ok.

You can’t see it on the screenshot but there’s a backslash in the file name. This is what was causing the issue.

Thanks Glenn. I don’t think there was a backslash when I edited the file. Perhaps it was the " ?

All the other files had uploaded before this so it has solved the problem for most files at least.

This topic was automatically closed after 12 hours. New replies are no longer allowed.