Sorry i don’t under stand that neither dose the accountant.

I am new to this so forgive my lack of knowledge. ill talk you through the process this morning

I have a meeting with the accountant introduce him to your software and show him our 2014-2015 accounts. he asks me to produce the trial balance which i did as per the instructions on the knowledge base. so the balance shows up correctly on that exported sheet. but on the computer it don’t, but when you change the date range it changes to the correct balance. surely what is sown on the screen and what is in the export should match ?

if you say its the Net figure what is it the net of? and why would it change to the figure i am looking for if i change the date range

CORRECTION: the amount on the print out is not showing the correct balance as previously stated its showing the same balance as on the chart of accounts

so the balance shows up correctly on that exported sheet. but on the computer it don’t

So where exactly is it not showing the correct balance? Can you provide a screenshot or let me know the exact report you are looking at? 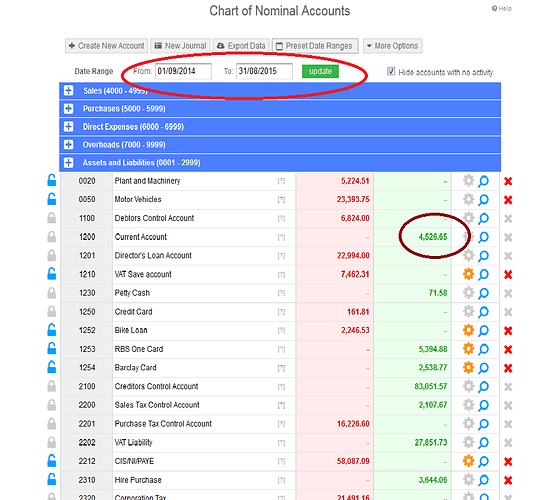 So this image shows the Chart of accounts set to our accounting year
as you see the current account balance is showing £4526.65 now my account believes this should show he correct balance of £42692.65 this goes for the other accounts are not showing their correct balances 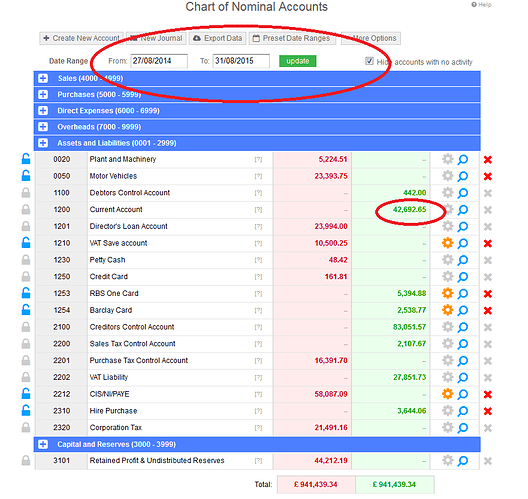 we have submitted the end of year.

The Chart of Accounts report doesn’t show balances, it shows the sum of transactions over a given period.

This would then explain the difference.

so its like a difference between the starting balance and all of the transactions that have come through the account ?

Let’s say you set the date range for last month October 1st to October 31st, what you will get in the COA is the sum of all transactions that went through the bank account between those dates.

Now if you change the dates to cover a very large period that encompasses every entry on the bank you effectively have a bank balance.

okay so i understand how it works. but for it to work over a log period of time you would have to start your balance at 0 would you not

When you enter an opening balance for a bank it actually creates a ledger entry, you can see it for yourself by drilling down to the current account from the COA. So as long as the date range picks up that opening balance it’s fine.

Okay i have done some sorting so it shows for now

He said that surely when you run your end of ear it should bring the balance forward from the last year he said he’s never know of a software that shows it like you have explained it.

i am now caught between a rock and a hard place as i am using this great service but i am getting it in the neck because the accountant wont even look at the accounts until they are some were near the correct data.

I have since had a brain wave if at the end of the year i just take the balance then add the amount showing on the COA then it should add up to the balance on the account should it not ?

I have spotted the same thing and struggling as to how I would produce an accurate trial balance in the second year because the chart of accounts does not incorporate the brought forward position at the start of the period you require your trial balance for.

all other accounts systems I have seen allow you to produce either a transactional trial balance which is just the movement for the year or a full trial balance incorporating the opening position of the balance sheet codes. The later of the 2 is the one that all accountants require to produce end of year accounts.

You shouldn’t have to put a date range in that covers every entry in the system. The P&L codes would never be correct.

He said that surely when you run your end of ear it should bring the balance forward from the last year he said he’s never know of a software that shows it like you have explained it.

Just to reiterate The Chart of Accounts does not show balances. It shows activity over a defined period.

If you want to show balances then you’d need to download a trial balance or run a balance sheet report. When you run your year-end it moves the NET of the P&L activity for the year onto the balance sheet, it does not touch bank balances in any way.

@amyearsley I do accept that getting a TB in QuickFile is not as intuitive as it could be.

The COA can work as a TB if you set the date range at the top to encompass all transactions, across all accounting periods.

What we want to do in future is extend the COA so you can still specify a particular accounting period (e.g. 14/15) and see the transactional balances for that period, but also to have an additional column that will show the balances brought forward.

Thanks for the input it think its something that needs to be addressed as it stand it seems it will be a bit of a Faf when it comes to next years accounts. i think you will need to come up with a way of it showing the balance brought forward this would make life easier as there will be less towing an throwing and manual adding

We do already have an Extended Trial Balance (ETB) in QuickFile but it never made it into full production and was something we made available to our own accountants and some Affinity users.

As I say we will in time bring this functionality into the COA. In the mean time you’d just need to run the COA for two date ranges.

In each of the above cases you can export it to CSV.

We have now released a slightly simplified version of the Extended Trial Balance (ETB) that is available to all users. This report can also be exported to CSV.