Just wondered if there was a chance to allow a part payment against an invoice rather than just a full payment by direct debit through the API?

Similar functionality for the assign to an account, but rather to an invoice:

I’m sure this would be useful, particularly for deposits.

I’ve logged this for now and we’ll take a look to see what would be required to enable this.

I guess here we’d have a text box to allow an amount to be specified, I think however it will need to be restricted only for single collections (i.e. one invoice).

I agree with single invoice collections. At a 1% charge, I don’t think it’s something to cry over for multiple payment requests!

Would this functionality be available via the API too?

Have you had a look at Client_NewDirectDebitCollection? This will allow you to request a sum and apply it to a specific invoice, it can also be a partial request, e.g. for a deposit.

What we can’t do is request a sum, split it and apply an apportioned amount to a group of invoices. That would require more extensive changes to the way payments are allocated.

Hopefully all that makes sense!

How would you set the amount to collect, or would it assume the full invoice amount?

Mmm I did assume you would be able to set an amount here but it seems that is not the case.

I think we could probably update that API method to handle this along with the changes to the web UI.

Just a quick one to let you know that the API part is implemented. This will allow partial amounts to be collected and assigned to invoices. 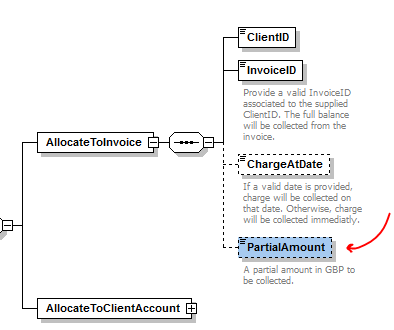 Fantastic! Thank you very much!

This topic was automatically closed after 2 hours. New replies are no longer allowed.