Depreciation over a period of 5 years

How do i record this for the balance sheet please

there are a few steps in disposing of a van - removing it from your accounts.

The first one is to establish how much depreciation you charged over the last 5 years. This figure will need to be removed from your accumulated depreciation charge.

For example, if you followed Capital Allowance methods and values, you might have charged 18% depreciation using the reducing balance method.

With the figures you stated, your Net Book Value and Accumulated Depreciation would be like this: 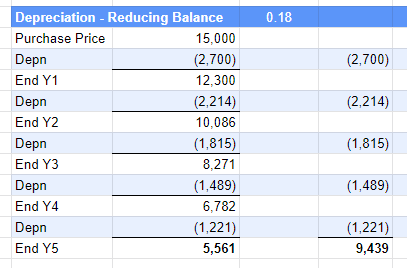 It is the NBV compared to the sale proceeds which shows if you have made a loss or a gain on the disposal of the van.

And with the figures we’ve used, you will have made a gain of 1,439 on the sale of the van

You would have to look back through your depreciation charges for the van for the last 5 years to get actual figures for the depreciation you charged against the van, but taking my 18% figure of 9,439, then the journal entry to dispose of the van would be like this one:

Note that these figures don’t take VAT into account - I’ve used net figures because I don’t know if you are registered for VAT.

This will leave you with a gain in the disposals account as below:

That’s how to record the disposal of the van and the subsequent gain in QuickFile.

You might have to take a look at your capital allowances though, because there could be a balancing charge that arises from this if you had to put some of the original cost of the van into the main pool - unlikely but possible.

Thank you for this

Not sure how my accountant originally recorded the capital allowance so will look through their return for the year end i bought the vehicle.

This topic was automatically closed after 12 days. New replies are no longer allowed.