I’m not sure why it didn’t run on your account overnight, every time I run manually it’s fine (just updated now). The message we get back is vague to say the least. I’ve made a slight change on your feed so we can re-evaluate this tomorrow.

very odd, thanks tho, will report again if another problem pops up
thanks
Darren

Hi there - my Barclays feed hasn’t updated for 6 days now. Is there a known problem?

My Barclays feed didn’t run overnight either. I made several payments yesterday but these have not been brought over. I will review again tomorrow.

The feed has been running every day. There are no known problems, we also use it internally so tend to discover issues quickly. That said there is a theory we are working on as to why some feeds intermittently fail on particular accounts. @subflow and @CB15 I will take a look at your accounts and report back shortly.

Oh…It does seem that the feed didn’t run at all last night. The Barclays system was inaccessible during the time we normally run the feed, possibly due to maintenance. We are running the feed now.

It should take around 2 hours to complete.

Thank you - I suspected Barclays maintenance may have caused the problem as they generally do it in the middle of the night.

Thanks for responding Glenn. Incidentally, it still hasn’t updated since the 6th, despite not having made any changes on my Quickfile or Barclays account (that I’m aware of).

Is there a ‘quick fix’ I can use to pull down the transactions as I’m falling behind with my accounting.

Cannot get Barclays feed to work. I am on standard Google. Do I need Google Chrome for it to work?

@barry Are you referring to the automated overnight feed or the bank feed plugin that you install on your Chrome browser? The latter requires Google Chrome, the former doesn’t.

Glen
Thanks for your help. Now working

I haven’t got any transactions since 18th Sept. Do you know if there is a problem?

Hi Glenn, wondered if you made any progress on the your theories on ‘why some feeds intermittently fail on particular accounts’?

Still seems to happen quite frequently to me, and as of this morning I haven’t had an update since 03/10

Just to add another user to the list without Barclays overnight feeds. Ours has not worked since 30 Sept.

Yes there is one pattern that seems to be emerging. If you log into Barclays there is an option to show/hide the export box. Accounts that frequently fail appear to have either removed this box from the dashboard (so the parser must take a different, longer route) or the box is minimised. 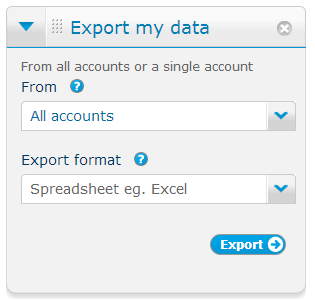 This is only a theory at the moment, bank feeds are a bit of an imperfect science. We are looking to add a snapshot facility to our feed that will give us a clear indication of why feeds fail…In the mean time try this!

I have also manually pulled in the feed for you, oddly when we do this it never fails

@ahowe your feed is up to date. Did you change anything yesterday?

Hi Glenn, thanks for the response.
I discovered the manual feed option via Chrome and used that instead - which worked just fine. There were no new transactions yesterday, so I will keep an eye on it.
Regards, Andy

Sure, let me know if the feed doesn’t update.

Hi Glenn, our Barclays feed had worked fine since the last hiccup in October. But now we’ve had no updates since 18 November. Nothing has been changed with our feed settings or on the Barclays sign-in page. Any suggestions please?
The manual feed option in Chrome works OK, but I prefer the automatic method.
Regards, Andy