When customers pay an invoice via Stripe, Quickfile automatically reconciles the payment with the relevant invoice when it appears in my Stripe holding account. That’s great, but what it doesn’t do is automatically issue a payment receipt email to the customer. If I want to do that I have to open each payment record and click on “Send payment received email”.

The problem with that (apart from the extra faff) is that the payments report doesn’t show which payments have had a receipt email and which haven’t. Even if I go in and look at the details of an individual payment, it still doesn’t tell me whether a receipt email has been sent for that payment or not. The only way to check is to search through the Sent Email Log, and that doesn’t even let you search by invoice number. Bear in mind that the order in which payments arrive is not the same as the order in which the invoices were issued.

This makes it hard to keep track of which payments have been acknowledged and which haven’t.

Have I missed something? Is there a report that will show me at a glance which payments have been acknowledged?

This is also a problem for payments made by other means (e.g. bank transfer). It’s slightly less of a problem there as the tagging doesn’t take place automatically, so it’s easy to tick the “Send a receipt” box while tagging the payment, but the fact remains that there is then no way of checking by looking at the payment record whether a receipt has been sent. (“Did I remember to tick that box or not?”)

For stripe specifically it may be possible to configure Stripe to send a confirmation email even if QuickFile won’t.

Oh, that’s certainly true, but Stripe won’t tell the customer what bill has been paid, i.e. what invoice that payment was assigned to.

The user will see what invoices they’re paying before they pay, similar to this:#

We do send a request to Stripe to send an email receipt, as @ian_roberts mentioned above. This looks similar to this, which includes the invoice numbers: 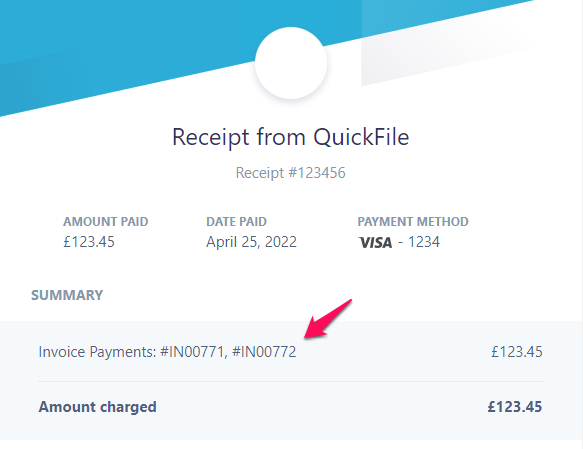