I have setup QF for a client, whose accounting year goes back to 2001/02.
I needed to setup the accounting records from previous year balance sheets to arrive at 2014/15.
So this meant closing each accounting year from 2001/02. The automatic year end journal in QF only goes back to 2010. (see screenshot below). Although its not a problem as i was able to create my own year end journals from 2001/02, I just wanted to highlight this point, and maybe if possible, in the drop down box one can choose a custom year end date? 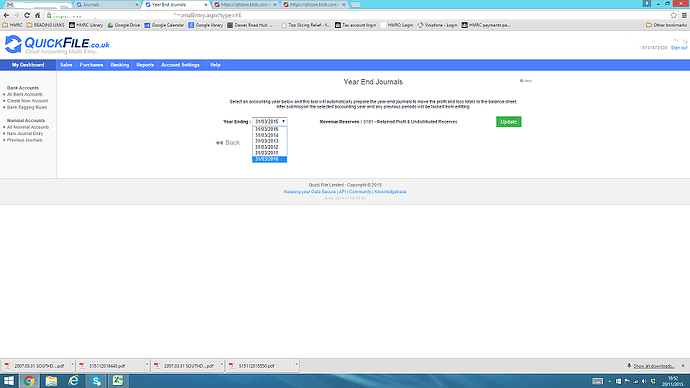 Is it just journals you’re posting up to the 14/15 accounting year? Or are there invoices on this account as far back as 2001?

its just 3 journals for each year since then to bring in the balances and make the adjustments that i need to. One of this journal is closing year end.

The client accounts that i mentioned above, I am now in year 2012 so am able to use the year end journal.

Please could you help? Please look at account 6131472685
Sorry i know that its the weekend but if you are around it will be great, otherwise it can wait till Monday thanks.

It turns out that even though there seems to be a date lock till 5/04/2012, i am able to post new journals just for 5/04/2012.
For now i have manually created the year end journal similarly to how i did for pre-2010.
The above issue is not resolved though.

The only problem with doing manual year end journals i.e. the ones before 2010, is that the P&L account is nil afterwards, as i have moved all P&L items to reserves. But with automatic year end journals, they preserve the P&L as it is. (hope this make sense).
If you want to look, look at this account’s P&L for 2010 and 2011 and then look at 2012. You will see the difference.

There is an exception made for the last day of the accounting year for journals, this is to make it easier to apply year-end adjustments.

We’ve had a look at extending the number of years back for which you can apply year-end journals. To be honest we didn’t expect this to be a a requirement. We can revisit this but I can’t say if it will be within the next week as it’s going to be a bust period for us now.

We’ve updated this to go back 17 years, I think that should be sufficient. It will be available on the next release (1-2 days).

I’ve not been able to replicate that?

I’ve added a year-end journal on our test account, deleted it then added it again.

I did manually try to unlock the lock date, it would not allow me.
The message was that there was a locked journal in place .

I see a year end journal posted to 05/04/2013 which matches the date your accounts are locked to.

You would need to delete that journal to remove the lock. If there are other year-end journals pre-dating this then the lock moves back to the next year-end date.

Over the weekend, I was unable to wait, so when i was able to manually create year end 2012 journal, i proceeded with 2013. So sorry that you don’t have a good trail to follow.

You will see in the journal list a journal dated 5 April 2012 - Year end 2012 with two ** , this is the manual year end journal i created because i could get the automatic 2012 year end journal again.

You will also see a test journal. I was able to create it on 5/04/2012, but could not delete it at the time.
When this test journal was created, there was no manual year end 2012 journal.
Everything was locked even after i deleted the 2012 year end journal.

I have a separate test account. I will try to do the same (i.e. delete an year end journal and see what it does) and let you know,

I tried doing the same on the test account and it worked fine. No issues at all!

The year end journals went back to 2002, which is great - thanks for this.

The account above which had issue with 2012 journal. I now need to delete 2013 year end journal as i need adjust an accounting entry between 2012 and 2013. I will try this afternoon and let you know how it goes. Fingers crossed!

Many thanks for all the help.

No problem, glad you sorted it!

This topic was automatically closed 5 days after the last reply. New replies are no longer allowed.