Hello
in my previous accounting software, I would create dividend vouchers and it will go straight into liabilities until paid out… so if there is not enough money to pay out in that FY, it can still be paid out as it has been already declared… how would you show company dividends to shareholders in arrears… because with quick file, you cant create dividends vouchers unless there are payments to create tags from…

In my previous accounting software, I would create dividend vouchers and it will go straight into liabilities until paid out

Just to understand this correctly the money went into liabilities, where did it come from?

In double entry bookkeeping there is always a debit and a credit?

On clear books, you would click dividends journal, and create dividends…. When this happens, it will
Show as a liability on the balance sheet until it’s paid out … This way even after 3 years, the declared dividends can be brought forward and paid later…

Sent out of office

A journal has 2 sides, one side would be the liability account what was the other side?

The reason for asking as we could recreate this in QuickFile. 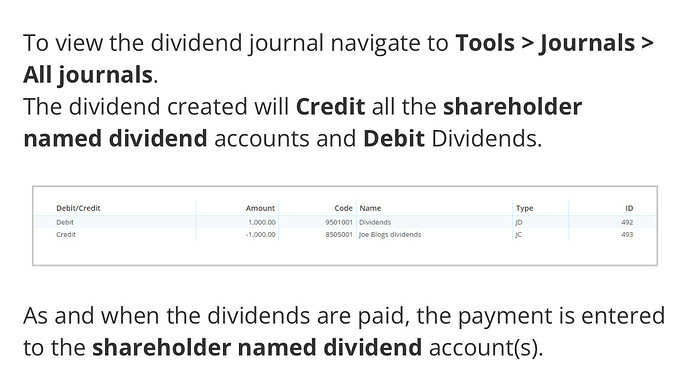 I found this post in the forum along similar lines to what you are asking.

or if the directors are the only shareholders, just put it in the DLA …

If there is a credit balance on the DLA, then debiting dividends there is effectively paying them so no need to pay them from the bank.

However, if there is no loan due to directors (shareholders) then dividends declared must be paid within 9 months - they can’t be carried forward unpaid.

I’m a bit confused why I received this. Was it meant for someone else?