Hi, I have a number of clients that I bill monthly. This has been great function and has continually happened every month but now after 12 months this has expired. Can I initiate this to start up again indefinitely or do I have to set them up again? And if I set them up again will it happen again in 12 months. My issue with this is that it doesn’t notify you this has expired and could result in not invoicing clients? Any help will be very much appreciated. Thanks nicky

Each recurring invoice profile will have a start date and a number of occurrences defined. 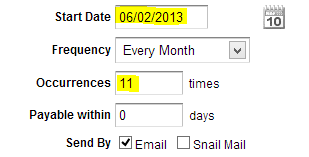 All you need to do to continue with the profile is increase the number of occurrences, if you want it to run indefinitely just enter 999. You can modify any of the existing templates you have, they don’t need to be re-entered.

As mentioned, I’ve now re-activated the recurring invoices, having set the occurrences to 999 as Glenn suggests.

It would be nice if Quick File could email the account administrator to warn of any recurring invoices that are coming to an end.

I’ve noted that down. We do have a long list of feature requests so I can’t promise anything soon, all I can say is that it’s on the list.

Thanks Glenn, any advice on the followong…?

Unfortunately the system does not retrospectively create invoices. So yes, you would need to manually create them.

Unfortunately the recurring invoice system does not retrospectively create invoices. So you would need to manually create them.

@nicky we have now configured an email notification to be sent whenever a recurring invoice expires. Hope that helps!

Retrospective creation would be a nice feature if you’re transferring your accounting to QuickFile and have a few dozen (or more?) invoices to create!

I have couple of recurring profiles that paused on 31st Aug 2015, so recurring invoices for 1st September 2015 were not sent out.
I have just activated these profiles and it shows the next scheduled invoice will be 1st October 2015.

Reading from this post, i gather the retrospective invoices for 1st Sept 2015 will not be created?

Is there anyway the system can create the missed invoices?

We don’t have a way to do this I’m afraid. It’s not likely we’ll implement it either as in some cases it could end up creating 100s at once making it very easy to create a mess quickly, we always try to avoid these situations

okay, i understand. thanks

Some thoughts on this

However, there may be another complication.
The system will have to be careful as to not allow new retrospective invoices to be generated if they fall in the previous accounting period which is closed/locked.

When the profile is reactivated, maybe the system should give an alert to the user that ‘no retrospective invoice will be generated’.
When it happened to me yesterday, i had to come check the forum. So maybe some kind of alert will be good/time saving for the user.

This topic was automatically closed 2 days after the last reply. New replies are no longer allowed.