thank you for having built this amazing piece of software, truly enjoying it!

I do have a question on how to handle mortages for buy to let properties. I have followed the approach suggested on this thread and it works a treat:

I am new to accounting, I have a loan and payments and interest to enter each month, how do I do this?

Are you trying to say that you wish the nominal to be moved to long term liabilities? If so then yes I agree I have not found a solution to that either.

Even if I create a new nominal and place it under long term loans it still appears as a current liability.

Yes, as this is a mortgage it needs to be shown on the balance sheet as a long term liability

What nominal code are you using to record the mortgage?

the mortgage is being recorded as a loan account opened under the banking tab. The nominal code is automatically assigned by Quickfile and it’s 1252, this was done based on the thread “Accounting for loans”.

Unfortunately I’m not able to modify the nominal code of any of the loan accounts, that’s the issue.

There are 2 options here:

As long as the code is within the 2300 - 2399 range, I believe it will be shown as a long term liability on the balance sheet.

Thanks @QFMathew, I have considered journaling the balance of the loan account to a long term liability nominal at year-end but that doesn’t solve the problem. I find the approach suggested in the howto thread very straightforward in terms of tagging the transaction.

It would be much easier being able to modify the nominal codes of the loan accounts under the banking tab in my opinion, not sure if it’s too complicated to implement for your developers but there is already a page where it’s possible to amend all details but the nominal, I attach a picture.

Having the possibility to change nominals would allow users to separate long term and short term loans very easily and I guess that loans are quite a common method of financing a business so many would appreciate having this possibility. 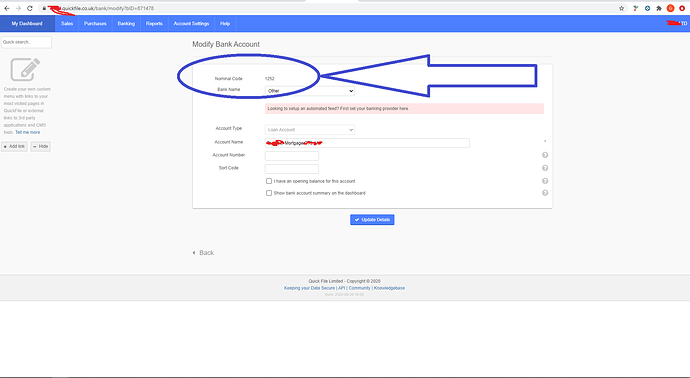 I don’t think this is going to be possible as there are some aspects of the system which rely on these codes. It’s certainly possible that we could look at allowing the codes to be changed, but it would remain within the same range.

With regards to tagging the balance direct to the nominal code, the concept would be the same as tagging it as a transfer, except you would use “Something else not on the list” and select “Mortgage” (or another code as you see fit). You could even set up a bank tagging rule to speed this process up a bit more, too.