I recently signed up for MTD on Quickfile and HMRC. All is linked and working but it suddenly changed my submission dates on both without my permission. The current quarter which should end on August 31st has changed to July 31st which makes it only a 2 month submission. HMRC say its nothing to do with their end. Please can someone advise as submission deadline is tomorrow…

Is this a period that you’ve selected from the available period list, similar to the below?

Yes, but it shows all of the previous filings as 3 months and the new one just 2 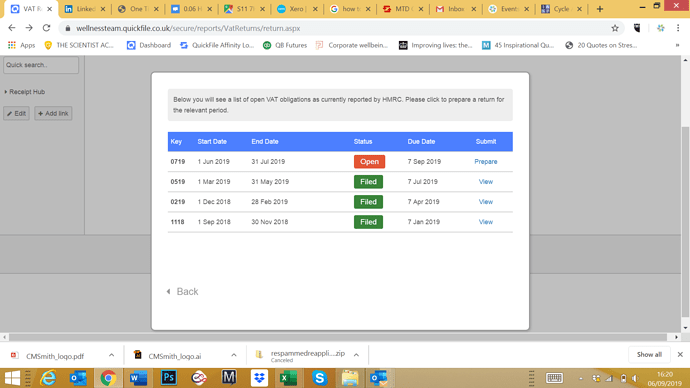 These dates are supplied to us directly by HMRC. I’m afraid, if they’re incorrect, you will need to raise it with HMRC directly.

And then select “View return deadlines”, you should see the same due date (7th September). Likewise, if you go to “View past returns”, it should list the other 3 filed periods for you.

Thanks Mathew, HMRC say that its nothing to do with their end though and it’s because of the software. I can’t change it on either end for some reason??

You wouldn’t be able to change it as HMRC supplies it to us.

Yes, it’s the same on both sides but they said it’s pulled from the settings on Quickfile end which I haven’t changed.

I’m afraid that’s not correct. The dates shown are sent to us from HMRC. When you actually submit a VAT return, what we send is the “Key” rather than the dates.

Right, no problem. I’ll go back to HMRC then. Gotta love going around in circles! I did imagine it would be their end though!

Thanks for your help