We’ve just not yet made any official announcement about this.

HI Glen, I’m hoping to find time to do my may accounts before friday, I’ll let you know how I get on with the recharging feature…

Any feedback is appreciated!

HI Glen, I’ve now used this new feature and it seems to work, I got a bit muddled about the VAT because I was invoicing expenses to a foreign company, but I’m pretty sure it’s worked, I’ve sent the invoice and attachments to my client and I’ll follow up to see if they have received it ok… I’ll confirm… I do have one question, is it possible for the QF purchase number to appear? this will make it easy to understand which receipt each line is for, also is the 10 lines max limit a permanent thing could it be increased

Over all though it has saved me loads of time as I hoped so a very big thank you!!.. I’m highly impressed and I think this feature will get used by many of your subscribers… I’m kinda chuffed I had a hand in it…

Guys, from what I can see this is a great enhancement as I used to do this all via an export then scan attach. Good work

@sampier Pleased to hear it’s helping and thanks for the input, it certainly assisted us on the development side.

is it possible for the QF purchase number to appear?

I guess so yes, we could potentially drop this into the item column: 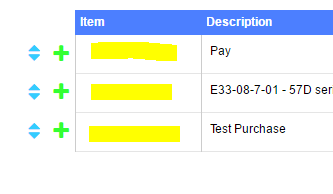 The 10 item limit will likely be bumped up to 25 in the next couple of weeks.

Yes that would work because when i scan my docs I name them according the the QF system… so then it all ties up neatly… so far its good… if you are looking for any other ideas let me know… obviously, mine is geared to free lancers etc… but there loads of us about… and we all have the same problems…

OK we’ll look at extending this shortly to record the QF purchase numbers. At the same time we’ll increase the limit on the number of expenses that can be recharged.

. I do have one question, is it possible for the QF purchase number to appear? this will make it easy to understand which receipt each line is for, also is the 10 lines max limit a permanent thing could it be increased

The 10 line limit wasn’t yet updated but we’ll look into that too.

Much appreciated, I’m using it already and it’s saved me a lot of time and headaches… thank you…

This is a reat feature that I find very useful. The way i have implemented it is to have a generic Supplier called ‘Expenses for Recharge’. I tag all my rechargale expenses to that customer, then at th end of the month use the ‘View all Invoices’ feature from the Supplier screen.
One thing that would help me to keep track of what I’ve already charged would be if the ones I’ve recharged are flagged somehow in the invoice list. I’ve considered using the Archive feature so that they completely dssapear from the screen, but I don’t know what effect that will have elsewhere (like will those invoices get excluded from my P&L?). Can you eithr assure me that the Archive option will be suitable, or look at extnding the recharge feature to accommodate this?
Thanks!

You could use project tags to keep track of them.

That would certainly work, archiving just removes the invoice from view they will still feature in all your financial reports.

As @Lurch mentioned, the other option would be to use project tags.

Thanks @Glenn . In that case I think Archiving will suit my needs.

@Lurch, I’m just using a generic supplier for speed when tagging, on the basis that it really doesn’t matter who the suplier was if I’m just going to charge on to a customer. The costs go to a balance sheet account (I created a nominal with ‘allow purchases’ option checked) and are held there until I generate an invoice to clear them.

I suppose it’s one of those horses for courses things. I don’t usually incur charges specifically for rebilling, it’s often just the usual costs that are then rebilled for whatever reason.