I have paid a USD invoice from a supplier via GBP credit card.

In the “New Purchase” page I’m entering the USD amount, let’s say $250. The credit card transaction also states the exchange rate used to get from USD to GBP, which I can put in the Exchange Rate field.

But the credit card has also added a non-sterling transaction fee, let’s say £5.

I could enter this £190 as the “amount paid” at the bottom. But then the transaction fee of £5 is effectively unaccounted for? Either that, or the recorded exchange rate (to get from the invoice amount $250 to the amount paid £190) appears incorrect… it’s only correct to get from $250 to £185.

What is the appropriate way of dealing with this? I can’t just add a separate line on the purchase page, because it will assume it’s in USD.

While this isn’t your exact scenario, there is an answer to a similar situation in this thread: GBP Invoice paid in different currency

I hope this helps, but if you have any further questions, please don’t hesitate to ask.

Hi @QFSian, I’m not really sure that the linked post is relevant here? That relates to a sale (i.e. payment by a client of “our” invoice) whereas here we’re making a payment (in respect of a supplier invoice sent to us)? I can’t see anything in the linked post about logging a transaction fee (in GBP) added by the credit card company when making such a payment (for a supplier invoice in USD).

Apologies for the confusion there!

You could separate the two entries out on the bank statement if you wish, having the payment on one line and the transaction fee on another, allowing you to tag them independently.

The alternative is to tag the full payment (including the fee) to the invoice, and the difference in the currency rates would be treated as a “Currency Charge” in the nominal accounts. It may then just be a case of flagging this with your accountant at the end of the year.

Thanks @QFMathew. Presumably “separating the two entries out on the bank statement” requires creating two new entries and deleting the original? It’s not like there’s a way of “splitting” an entry?

You could use a dummy/holding account to split it

@rhc so you’d tag the bank entry to this dummy account, then record separate internal transfers from that dummy account to the relevant ledger accounts?

And would you have a general-purpose dummy account (for use not only in respect of this bank/card but any others where splitting is required)?

Sorry if I’m using the wrong terminology here… haven’t entered many transactions so far, and just trying to find my way around.

There are occasions when a dummy account is needed for other things.

Such as splitting payments to pay multiple suppliers or for example adding back the cis tax stopped from an invoice to fully pay it down.

Would you just have a single dummy account for those multiple purposes?

For me id have seperate dummy accounts for example one for cis sub contractors another for splitting payments etc. Just so it can be easily seen which is which.

I’ve just noticed the following option in the bank feed: 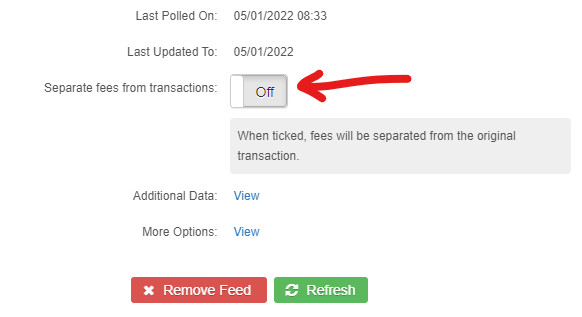 If I enabled this, presumably I’d end up with two lines in the bank account (one for the actual transaction and another for the currency conversion charge), so that I can just tag those separately and be done with it, rather than having to mess around with dummy accounts and splitting transactions?

And sorry for all these noob questions, but if I were to create a new “dummy” account, what category/sub-category should it go into? Or is this the wrong place to be creating the account?

In regards to the tick box for fee separation, it only works when your bank provides those fees separate in an extra line

@rhc OK that makes sense. Rather than one for “in” and another for “out”, could it also make sense to have one per real account (for splitting both in and out)? So, for example, if I have a real Santander account (with both incomings and outgoings), I could create another dummy account in the same “General Bank Accounts” category called e.g. “Santander Splitting”? (Just want to set out from the start with something sensible rather than make a mess now and have to fix it later!)

That is how I do it with the merchant accounts. You can do the same with your santander, one dummy account for in’s and out’s. In my current account I have got quite a lot of income and outcome in lump sums which need to be split, and to keep track I decided to have one dummy for the in’s and another one for the out’s. But it is up to you. And if you are not happy with the setup later in time you can easily change it.