Strange one here. I’ve set the banking feed for my Revolut GBP account to have “separate fees from transactions” enabled (because otherwise I only get the transaction without any fee amount).

Until now it’s been working fine. But today one of the transactions has come through with a transaction fee that doesn’t match what is in my Revolut account (and hence the balances now also disagree).

I raised this first with Revolut, and “the relevant team” looked into it and reported that there was no problem on their side (surprise, surprise).

Any idea how/why a simple number can feed across incorrectly? Is this common with open banking feeds?

It’s simple enough to make a manual correction to the fee amount in QF, and we’re not talking millions here, but I’m just wondering if there’s an underlying problem that needs to be looked at.

Here’s what I see on the Revolut side: 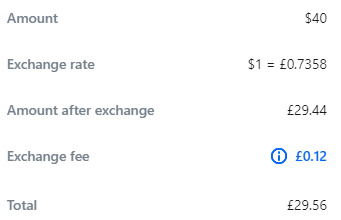 And here’s what I see in QF:

I did try deleting these two entries and refreshed the feed, but the same entries came through again.

Not sure why I didn’t think of that, except that the transaction fee (exchange fee) has transferred over correctly (i.e. the actual GBP value) for several other non-GBP payments… though the other ones are payments in EUR.

So maybe QuickFile is treating the transaction fee correctly for EUR but not USD?

I can be wrong but could it be possible that revolut sent out the wrong number, that they wrongly calculated the GBP fee from USD to GBP? Because I think quickfile only picks up the number (data) they get from them.
I also use zapier which gives the ability the see the feed (the data which is sent out by them) and there is only one number for the fee (not a USD number and a GBP number) and below that number is the currency short code. Maybe, in your case, they sent out the wrong currency code and that’s the reason why quickfile calculated that amount from USD to GBP, or they sent out the wrong amount (as mentioned above). Ian’s calculation is spot on, I am just wondering that quickfile is using the same exchange rate as revolut, and that one or even more days later? Could be possible because it is such a small amount and even slightly bigger jumps either way in the exchange rate wouldn’t change the outcome in that case.

I’m sure quickfile can shine some light on it, as they have all the information.

Yep, good point @rhc it could be at the Revolut side. That was my first thought… I’d assumed that QuickFile just received a number and stuck that into the local account without messing with it… hence I contacted Revolut first, but they assured me that all was correct on their side… though I really don’t trust that they dug deeply enough into this issue to be really sure. Like you say, hopefully QuickFile can tell for sure whether it’s at their end or the other.

I’ve passed this to our development team to take a look at in more detail. But if anything is out of place here, it’ll be fixed within the next few days.

In the meantime, it may be best to manually correct the fee.

@QFMathew if the dev team find that nothing is out of place, it would be useful to know, so that I can go back to Revolut and ask them to check more carefully. Because it must either be happening at their end or your end, and not in between. Thanks!

@drmrbrewer - Just to let you know that some things were tweaked on our side a week or so ago, so this should now be working as expected.

However, we’ll leave this open for a few days. Please don’t hesitate to let us know if you’re still encountering any issues.

Thanks for letting me know @QFMathew. I had suspected that this had been resolved, as I’d not seen any further issues.

I would note that my Revolut GBP account is showing in QuickFile with an “Account balance mismatch” today, even though there is in fact no mismatch at all (and the apparent difference doesn’t seem to correspond to any recent transaction in the actual account). I’m hoping this is just a strange one-off, and not another knock-on bug

It may just be a lag in the checking. This should correct itself, hopefully, overnight.

Hi @QFMathew I’m afraid it looks like this is a bug, because I’ve had this “balance mismatch” warning consistently now for the last three days, and there have been no new transactions in the actual Revolut account in that period, and therefore there is nothing that might still be pending or yet to clear through… it is in a steady state.

QuickFile is reporting a difference of £66.02, and this amount does correspond to a transaction dated 8 Feb 22, which was a EUR card payment from a GBP account (€77.88 paid to supplier, £66.02 deducted from GBP account including exchange fee).

But certainly the balances (of all three accounts GBP, EUR, USD) as reported by QuickFile exactly match the balances in Revolut, so I’m really not sure why QuickFile is telling me there is a balance mismatch.

EDIT well isn’t that typical… as mentioned, I’ve had a warning for three days running:

But this morning, nothing… all seems OK now. Maybe a weekend aberration? Or Valentine’s Day?

This topic was automatically closed after 9 days. New replies are no longer allowed.