I am getting a declined card using the Stripe integration.
I d not think this is an issue with your system but I noticed that the API version you are using is from 2013 and you are not using TLS 1.2 and other things.
This could be the reason, but anyway I think it should be updated.

I also noticed that the name has not been provided to Stripe, which could be the reason to be declined too.
“No name provided”

This API is still supported by Stripe and still works fine on other user accounts.

Are you presented with a reason for why the card was declined? Does it leave a trace in your Stripe account at all?

Yeah, I know that this could not the reason it has been declined. I am just pointing this out as there has been a lot of updates since 2013 on stripe.

The text on the first post was copied from Stripe.

Also, the name could be a thing too.

When you process a transaction through Stripe, are you given a reason either through QuickFile, Stripe or by email on why the transaction was declined?

From the stripe transaction declined.

Just to be clear. This is not a support issue that you need to fix. The connection works fine and I do not think this is a problem with quickfile but with the card.
It is just a suggestion to update the API. Just that.

Thank you for the suggestion. I’ll certainly pass it to our development team

Just for reference, we contacted Stripe regarding do_not_honor. Their response was as follows:

“do_not_honor” is just a decline code that the bank sends occasionally when declining a charge. It simply means that they won’t be allowing the transaction. The cardholder would need to ask the bank for more details as to why they declined that charge, and to allow charges from your business to go through.

My client confirmed right now that they had pass the limit for the month on the card.
He will fix it and try again tomorrow.

So no issues with quickfile or stripe here.

Great news with the update! Thanks!

I want to add some more info on this.
My client got an error, not sure if this was before or after you made the change. He sent me the screenshot on thursday the 2nd so I think it was with the new version. 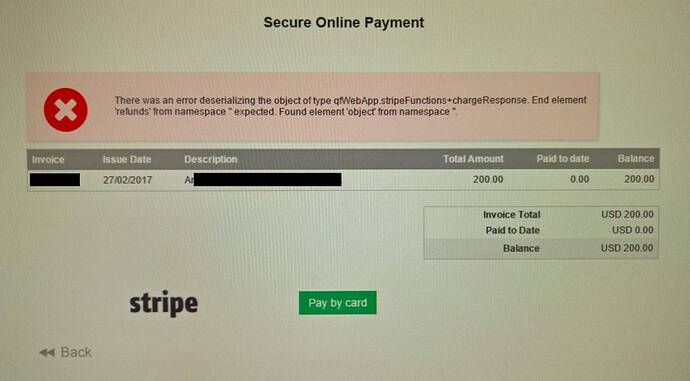 Because of this error, the system didn´t register the payment, but Stripe made it correctly.
He tried again and he got the same error and I got double payment on the same invoice but the invoice still appear as sent (not paid) on the system.

I am also using zapier to send the stripe transactions into the system and I got an error on this one because there was no client name and no description.
This is the error I got from zapier:
“Required field “Client Name” (ClientName) is missing. Required field “Description” (Description) is missing.”

This is not bad because if this works, I think I will have double records on quickfile, but I think that that information should travel to stripe with the payment.

Hope this helps. Let me know if you need more information.

Thanks for the info!

This was experienced around the 2nd March which was just before we released the updated. At that point we did fix this.

But please, don’t hesitate to contact us if it should happen again.

What about the missing info about client and description?

Has that been fixed too?

The stripe payments work as they have always used to, so they would be shown as they were previously.

Can you confirm that the client name is shown on stripe?
It is not on my payment.

The name of the client isn’t passed to Stripe. We do however pass the email address allocated on the account.

You are however, welcome to start a new feature request for us to pass the name to Stripe, if you wish.

Understood. My problem is that using zapier and stripe clash,
On your zapier integration, you require the client name and the description but when sending the info to zapier you do not include this information.

I will create a new feature request to make both compatible.