Hi Glen
I know this has featured before, but I’m having to sort out my accounts due to a significant over (then under) payment by one of my clients which was not handled well (perhaps on both sides, but mostly theirs

), which has meant having to roll back every one of my VAT returns as well…

As I redo the VAT returns, I’m checking the calculations and have spotted that 5 invoices raised for repayment of expenses are appearing in General Sales. I’ve tried journaling the amounts into the correct category, but it is not making any difference to my overall sales.

How do I go back and change the invoices so they are not automatically appearing as Sales - fwiw at least one of these shouldn’t have appeared at all, as it was directly linked to tagged POs…

I just want to be sure that I understand your situation and then hopefully we can guide you in the right direction.

Does that sound correct?

at least one of these shouldn’t have appeared at all, as it was directly linked to tagged POs…

I’m not sure what you’re referring to here I’m sorry? Purchase Orders can’t be tagged (they act in a similar way to an estimate). Even with a Purchase Invoice, a money in transaction (which is what I assume it would be if it came from a client), wouldn’t match a purchase invoice, as this would be money out.

Hi - thanks for the quick response.

You’ve found 5 invoices that are allocated to General Sales, but they are rebilled expenses so you would prefer them to be allocated to an expense nominal code

To do this part, you would either need to enable the nominal codes to be used in sales invoices (follow this post), and then edit the invoice, or do the journal, along the lines of:

If you date it the same as the invoice, that should make it clear if you go digging down in the chart of accounts report. However, bear in mind that only the net values are posted to a sales nominal code, so don’t include VAT in the movement (this is posted to a separate nominal code).

As for the latter - should have been more clear. I had uploaded the receipts for the expenses, created POs for each of them, then ticked the “rebill to clients” box. Was I wrong in assuming that this would mean the invoice would not be included in the General Sales nominal account?

By default we post all sales to a generic nominal code, 4000 General Sales, unless it’s changed. With rebilling a client, there is an option to post it to the same nominal code as the purchase invoice by ticking the “Contra Expenses” box during the process: 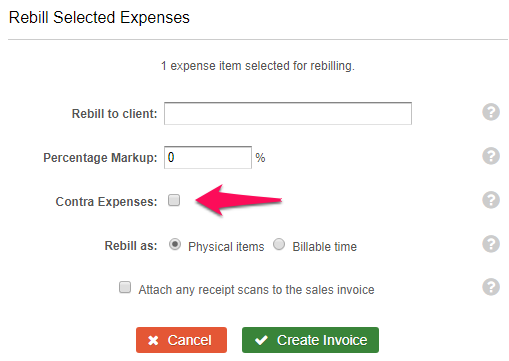 This will automatically allow the nominal code to be used for that sales invoice without the need to enable it.