I’m in the process of reconciling my transfers between banks and the functionality creates a problem when for whatever reason (typically slight difference in transaction date) there is no matching transaction in the receiving account, in my view when there is no matching transaction it would be better if the user were prompted to either create a new transaction or cancel rather than the system just going ahead with the transfer which often (in my world anyway)means the user then has to go an undo an unnecessary problem

Is there anything you can do about this?

There’s a thread I raised a while ago about a similar issue with the Receipt Hub tagging doing the same thing.

It’s not uncommon for transfers to be slightly different between two bank accounts. It’s quite common with merchant accounts for example, where a deposit is made on one day, but takes 2-3 days to actually reach your bank account.

In this case, I would use your bank statement for the dates.

QuickFile uses the double entry bookkeeping system, so for every positive, there’s a negative. Because of this, everything needs to balance, including your bank transactions (you can see this in more detail in your Chart of Accounts report). If the dates are different, then your transactions wouldn’t balance.

I hope this helps

That doesn’t really help, you assume banks are great chaps and transfers happen instantly but they do not, for example if I transfer $1000 from my USD Lloyds account it doesn’t appear in my Revolut USD account for 2 or more days so although the transactions are the matching transactions the bank statement dates do not match ie Revelout date os a few days later then Lloyds date, adopting your principal actually forces one of the QF statemnet dates to not match the bank statements

Please can you have another look at your answer?

Now, clearly if you could let Lloyds know time shave moved on and same day transfers are actually easy enough and there’s no need for my money to disappear into a black hole for a few days I would be a very happy man, I’ve asked many times what happens and it appears it’s a mystery to all involved

Is this not what the suspense account is for?

My answer is correct in most situations, but appreciate this can vary to a degree where currency conversions happen, especially cross-border.

If you need to keep the dates the same as they are on the bank statement, the only way to show this accurately, is to have another nominal or bank account as a “holding account”.

Is this not what the suspense account is for?

You could use the suspense account for this. The dates would still need to match for the account is balance, so you’d end up with 4 nominal ledger entries over 2 dates, rather than 2 on 1 date. If you do have different dates, it could result in a period ending with a balance on the suspense account, so it’s worth bearing that in mind too.

Yes, that would work (as would maintaining spreadsheets instead of using QF to do my bookkeeping) but to say the least it’s clunky and a clear example of the system dictating workflow which seems the wrong way to look at things. It also increases the potential for errors.

You could use the suspense account for this. The dates would still need to match for the account is balance, so you’d end up with 4 nominal ledger entries over 2 dates, rather than 2 on 1 date. If you do have different dates, it could result in a period ending with a balance on the suspense account, so it’s worth bearing that in mind too.

If the money leaves one account one day and arrives in the other 3 days later then I don’t see why you wouldn’t want this to be accurately shown on your accounts. I’ve always been against this “delete the transaction that the feed fetched” option. The point I think was though there are several ways to handle this and they are all somewhat correct but it would be nice to have the option as it can be easy to accidentally mix the methods if you just click a button and QF does something without asking you if you actually want it to or not.

Completely agree QF should not “Just do it” but to be given the option and choice is surely a good thing, I also accept the more traditional suspense account works well but it is more cumbersome especially when I’ve got about 300 to do and it’s just me in this case not a corporate army of bookkeepers!

The best solution is clearly that the banks sort their act out and realise it’s the 21st century and the money does not get put into an envelope and posted to the other bank - I suspect I’ll be long gone before that happens!

The problem here is that in simple accounting terms a bank transfer is a credit on one nominal ledger and a debit on another. You can’t have a credit on one date, then the debit 3 days later, as for those 3 days your books won’t balance.

In reality it needs to be sitting somewhere for that interim period and therefore strictly speaking it would spend those 3 days on an intermediate ledger. You could use suspense but that will interfere with your P&L, if you’re going to do this it would make more sense to use a balance sheet code.

Alternatively I would take the transfer date on the receiving bank and tag from there. The sending bank still owes you that money, even though it’s disappeared off their ledger, so from an accounting perspective it’s accurate.

From a purist point of view I agree with the solution, in the real world though it’s a long way from pragmatic since the reality is it means deleting the donor transaction and then letting QF recreate the same transaction a few days later - which then means without an intermediate nominal (which the bank call the intermediary bank to justify a non quantifiable charge that occurs beyond anyone’s control) the bank account does not reconcile

If you have feeds on the accounts at both ends then the simplest solution is to create a dummy bank account for “funds in transit” and then have bank tagging rules that pick up all transfers in and out of any of your real accounts and tag them as transfers from/to that. Then your main bank accounts will always match the statements and the “funds in transit” account will represent the “missing” money that has left one account and not yet arrived in the other. In cases where the dates on both ends are the same that’s fine too, the money will go into and out of the transit account on the same date and the only cost is two extra nominal entries.

Thanks, can I create a rule that will work on transactions already uploaded?

I thought this was possible but I can’t find the option - @QFSupport any ideas?

Be interested to know if there is a way as I’ve never managed it. Any auto tag I’ve created only ever works with a new set of pulled in transactions. It never works with existing ones.

I’m afraid not. Tagging rules will work only on newly created transactions.

I was getting confused with another piece of software, but it looks like there’s a feature request thread for this if you want to add your vote

I have added my vote and can I please ADD. 90% of my tagging on our Charities bank account is members subscriptions. So all I do is asign them to a nominal account “Members Subscriptions”. If I notice we have someone I have not set up an auto tag before who has paid a subscription there is no way to set up a rule that would apply to all the untagged entries in the account. Sometimes when I go to do this I am offered the chance to create a rule and sometimes I am not offered a chance. …

@QFSupport, just an add to this I can now confirm that SOMETIMES QF does recognise transactions on different dates match up when you do a transfer but not on others, please can you help me understand how this functionality works or maybe if there is a bug, I have attached a few screenshots 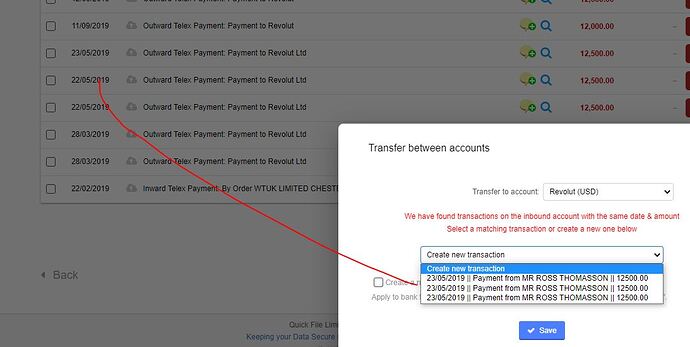